Why Winnie the Pooh is right and Google is wrong!

Video : Why Winnie the Pooh is wrong and Google is right.

On Yoghurt and “Barbie, the Hooker-icon”
A summary. For independent thinking and feeling. 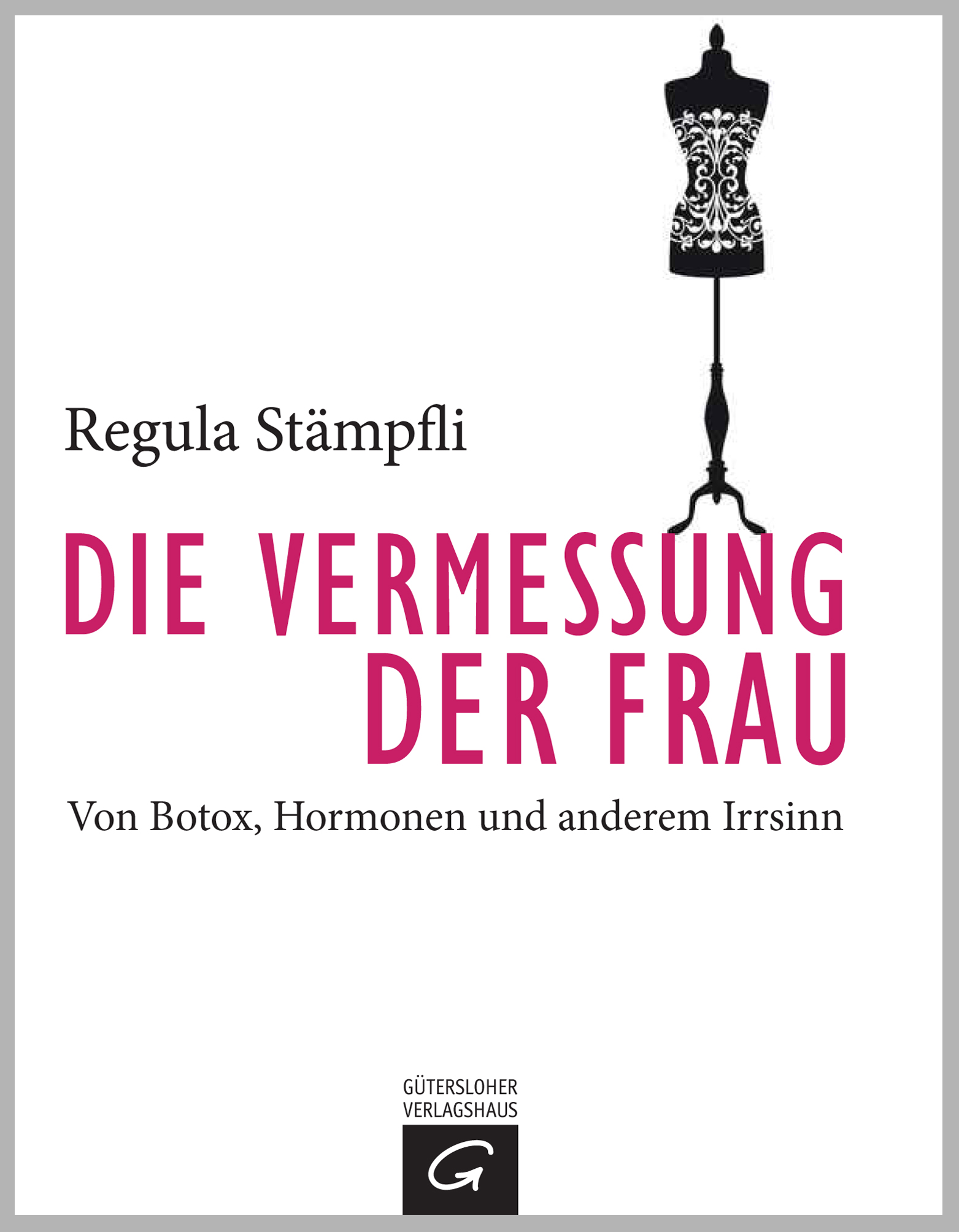 “The optimisation-strategies for modern people take ever more absurd forms, and we copy them all (…) The human Self has been reduced to physical attributes.”
This is the sobering conclusion that Swiss political scientist and historian Dr. Regula Stämpfli comes to in her book. She does this, however, without victimised undertones, but rather with utmost eloquence and a very ironic take on the whole thing. Stämpfli covers the philosophical spectrum from Snow-White to Nietzsche, from Kant to Barbie (Quote: “I have rarely argued as strongly as I have about the hooker-icon Barbie.”) She provocatively asks why people, like the yoghurt in their fridge, should have a use-by date stamped on them, and why they let biologists, and their dogma, make them feel old.
Her book is an entertaining literary adventure into the world of philosophy, culture, art, and technology. A book that makes you want individuality in a “Look-at-me-culture”.
Stämpfli comes from Switzerland and has lived in Brussels for a long time. She has three sons and is now living in Munich, working as a columnist and lecturer throughout Germany, France and Switzerland. Since 2008 she has also been working as an independent expert for the European Commission. Her students have called her “the Lara Croft of political science”.

Must women forever stay young and restricted? Are we nothing more than rows of numbers? Swiss political commentator Dr. Regula Stämpfli calls for more sensuality, diversity and zest for life in her new book.

“If Neoliberalism had tits made of cement, it would look like Heidi Klum.” Peter Sloterdijk, German philosopher in his diary (2012)

Article by Birgit Braunrath for Kurier, 11.8.2013
Translated by Sam Reed

Kurier: Ms Stämpfli, can you tell us your measurements? How tall, how heavy and how beautiful are you?
Regula Stämpfli: (laughing) You are not being serious? Despite the message of my book? You might as well have asked the Messiah just after he gave the Sermon on the Mount, “Hey, Jesus, be honest: how many villas do you own in Jerusalem? Can you tell us the best whore in the city? I am not a relationship between years, kilos and centimetres. You can see for yourself how beautiful, tall and light I am. Chances are, you will just see your own concerns, so I can only reply: How tall, how heavy and how beautiful do you want me to be?

You have a wine stain birthmark, which you wear as a self-evident part of you. But you mention that you increasingly get asked why you don’t have it removed. Is the trend towards homogeneity indeed stronger for individuals?

Of course. We see this when people introduce their political opinions with “At my age…”, as if their date of birth had something to do with what they think. And, with regards to appearance, too much unrequested feedback is given in the German-speaking world, such as: “Are you sure that colour suits you?” What’s it for? In this case, I stand by the English: “If you can’t say something nice, don’t say anything at all.”

You talk in your book about a “Biodictatorship”. What’s that?

We humans are living creatures that differ from toadstools and horseflies in that we are capable of more than basic biological functions. Despite this, men in white coats and grey suits attempt to return us to the primordial swamps. The picture of mankind painted by the media consists of these functions and their (evolutionary) ends.

Is that really a phenomenon of modern times? The dressmaker’s dummy on the cover of your book reminds one of how women were tied up in corsets. That is hardly different to today’s model shows.

The argument “This is nothing new” just shows that even you, as an intelligent journalist, are trapped in the consumerist mind-set. My book’s analysis shows that ideals of beauty and the body, and the image of humankind, are not fixed, but have developed throughout history. Today, however, we are taught that they have been scientifically proven, and have always existed. This is simply idiotic.

“The human Self has been reduced to physical attributes”, you criticise in your book. Why do you frown upon it when a woman emphasises her physical virtues, “makes herself pretty”?
Objection! Women and men can do what they want with their bodies as long as they’re responsible. My criticism revolves around the fact that the body has become the new religion, the crime scene where an unquestioned ideology manifests itself. Instead of going to church, more and more people rush to the gym. Now, I think what counts is to develop one’s own self-esteem. To create a diverse image of oneself, so that short-legged blondes don’t strap themselves to Procrustes’ bed, and spend the money on my book instead! (Laughs and adds: “Please turn on Sarcasm-detector.”)

Must we then distinguish between good and bad women? Have solidarity only with those who embody the female archetypes, who are natural, sensuous and self-assured? But not with the assimilated, job-hungry plastic women?

I don’t like such categorisations and am not forced to accept any category, not even my gender. (Laughs) If there was more love of humanity, plastic women and plastic men would have no chance and would not currently hold certain important roles.

Much is said these days about solidarity among women. Where do you think this solidarity ends? With Heidi Klum? With Angela Merkel?
I don’t ever talk about women solidarity because, like I said, I don’t like categories. I think one important step lies in the reconciliation of many men and women with their mothers. Because mothers have been put down and hindered in their self-fulfilment for centuries – this sometimes leaves sad marks on the children.

You write that you don’t think much of Women-quotas, as long as only “plastic women” make it. What kind of Women-quota do you recommend?
What about a gender-independent intelligence quota in politics and economics? (Laughs out loud) Although, as Kant said: “Intelligence is not just a question of the mind, but of the heart.” Changes in the labour market would be decisive: more time is needed for people rather than systems.

Are the new women, those who never start a day without a systematic checklist, never go on a date without shaving their privates and never get a photo of themselves taken without make-up, really the anti-pleasure automata that you make them out to be?
How did you come to such an absurd conclusion? I’m talking about the de-sensualisation of the world, not about anti-pleasure. I’m talking about a process by which laughter is replaced by algorithms. And just as an aside: I also don’t let myself be photographed without make-up. And where privates are concerned, I state in my book: adorn them as much as you want. What’s important is more awareness whether what you are doing is what you want to do and not just what is expected of women.

The demand for nudity is omnipresent. Online media receive umpteen more hits if they show the newest, hottest Bikini trend than if they report about politics. Where does this lead?
Hopefully not to politicians stripping for votes! (Laughs) The problem is the pornographisation of everyday life: the idea of the human body as a disposable good.

Will good sex die out because pornographic images and ideas about sex will stick in people’s minds and be imitated?
Not mine! And probably not that of many men and women, because most lovers are not imitators but individuals. However, we must be careful with very young and susceptible people.

The expectations of bodily perfection become increasingly extreme. What will come next? Or will there eventually be a backlash?
One that takes us further back than Mrs. Neanderthal, who cooks mammoth stew in a cave? (Laughs) People are capable of and worth so much more than the media’s presentation of them. That’s why I’m confident. The high-point of the corset, which people are now trying to permanently record in the brain stem, has been passed. 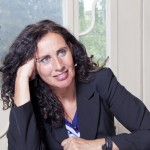 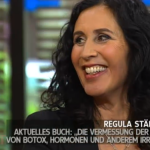 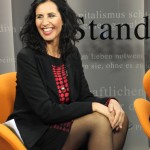 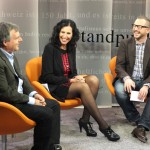 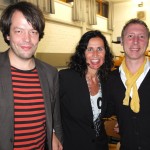 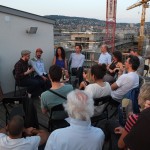 Dr. Regula Stämpfli is many things. She studied history, political science, political theory and media-science. She works as a lecturer, author and consultant in Switzerland, Germany and France. She finished her wide-ranging studies (including a teaching qualification) in 1999 with a dissertation on the First and Second World Wars (“Mit der Schürze in die Landesverteidigung 1914-1945. Frau, Armee und Gleichstellung” –  Defending the Nation in an Apron – On Women, the Military and Equality from 1914 to 1945) This dissertation culminated in an international congress on ‘Army, State and Gender from 1918-1945’ in 2002. In 2003, Stämpfli published a political glossary (“Von Stummbürger zum Stimmbürger” – From Mute-citizens to Vote-citizens) at the MAZ, the Swiss school of Journalism (at which she was active in the Department of Politics and International Relations until 2011).

For four years she worked on a modern interpretation of Hannah Arendt’s “Vita Activa”, published in Brussels in 2007 as “Die Macht des richtigen Friseurs” (The Power of a Proper Barber). Second and third editions of the book were published (as has been the case with all of Stämpfli’s subsequent books). A revised version will soon follow, and will include “Poesie von Algorithmen und den begehrenden Pixelblick” (The Poetry of Algorithms and Wanton Pixel-vision), a criticism of modernity’s perception of time, and of mankind and its labours. Together with IFG Ulm, her professional advisory board, Regula Stämpfli initiated a publicity program called “Designing Politics – The Politics of Design” for the HFG Ulm institute in 2007. The “Ulm discussions” continue to be held among various Design-networks. Under her supervision as director of IFG Ulm, René Spitz issued the “HfG IUP IFG. ULM 1968-2008” collection.

In 2013, Stämpfli’s popular book “The Measurement of Woman” was published by the renowned publisher’s, Gütersloher Verlagshaus. It has recieved innumerable reviews and readings, including TV and radio programs. A second edition was launched only 4 months after the book was initially published.

A multi-faced intellectual, Stämpfli is known from her written works and television appearances as a sharp-witted analyst, columnist and inspirational talker. Views of her vary greatly: the Neue Zürcher Zeitung once referred to her as “The pain-in-the-neck from Brussels”, whereas her students have called her “The Lara Croft of Political Science”. Her popular works comprise additional books, including a collection of her articles, “Aussen Prada, innen leer” (Prada Without, Empty Within), and a photography book and exhibit, “Frauen ohne Maske. Über Frauen und ihre Berufe” (Mask-less Women: On Women and their Professions) with collaborator Josef Riegger.

Stämpfli is active in a number of international organisations, and has worked since 2008 as an independent expert for the European Commission. Information on upcoming public appearances, publications and articles can be found on www.regulastaempfli.eu